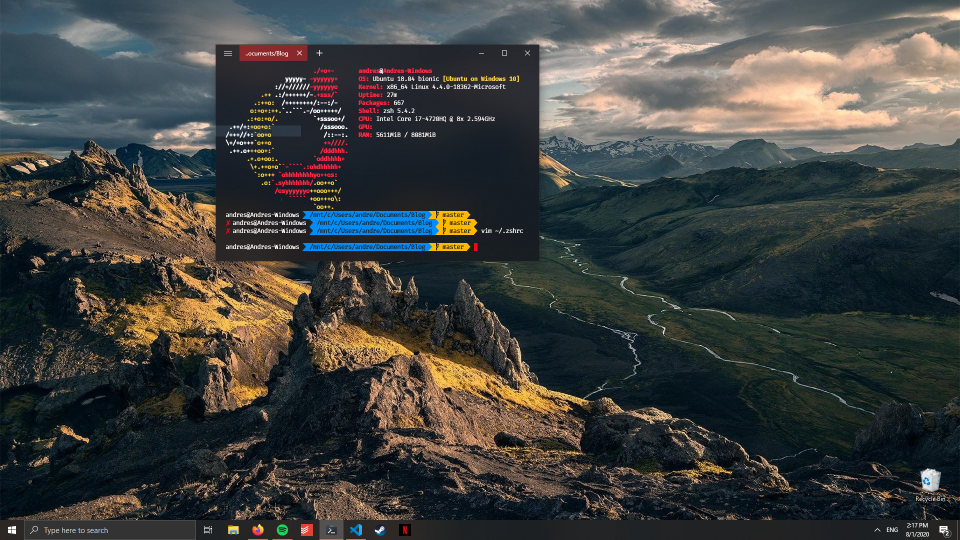 Before I start, let me get something straight: No, I haven't lost my mind.

With that cleared out, let me give a little background: I've been working for years on Unix systems, first on Ubuntu (and a bunch of different distros) and recently on a Mac. I never really liked the development ecosystem for Windows. That haven't changed much, my work laptop still is a MacBook Pro, however, I've been gaming quite more often now during quarantine, so having to change between my "work" OS (Ubuntu) and my gaming OS was starting to get a little bit tiring, so I was wondering if I could get Windows 10 set the way I like to work on my personal projects.

I found this great blog post after Googling "Developer setup for Windows 10", and it really helped me get where I can work comfortably. Here's a writeup on what I did, so maybe it might be useful for someone trying to move from a Mac (or Linux) to Windows.

I don't really use Chocolatey much, but it's useful when constantly working on Windows, also, I used it to install my Terminal Emulator of preference.

First, I installed the Windows Linux Subsystem, so I can get all the goodness from a Unix system into my Windows setup, there are a lot of tutorials on how to install WSL, and there's no much use for me to write down the same thing, so just go ahead and follow this one.

I tried a bunch of terminal emulators, from the web-based Hyper, to Microsoft's shiny new Windows Terminal, but ended up settling with Fluent Terminal because it was super easy to configure, and it looks great. This is where Chocolatey comes in handy:

Then go to Fluent Terminal's Settings (Ctrl + Shift + ,) and edit your Profiles to set WSL bash shell as the default. I didn't really have to change anything, there should already be a WSL profile pointing to C:\windows\system32\wsl.exe that you can just set as Default.

Install and configure your favorite shell

Okay! So we're inside good ol' bash running on WSL (With your Linux distro of choice, most likely Ubuntu I presume), so now you can pretty much do what you normally do with you Linux setup. I'm going to assume Ubuntu.

Most people are fine just using bash, if you're one of them, you're pretty much set at this point. However, I'm more of a zsh guy, so the first thing I do when setting up a new Unix system, is install zsh with Oh My Zsh:

Finally, I edit my ~/.zshrc file to use the agnoster theme (The one with the cool looking arrows that pretty much everybody uses these days):

Just a quick tip for WSL: You probably will be working on the everyday Windows directories (You know, C:\Users\username\Document and such), so be aware that the WSL home will be different, and your Windows filesystem will be mounted on /mnt/c/, so a quick cd ~ will take you to the Ubuntu home and not C:\Users\username\.

Having to type cd /mnt/c/Users/andres/ every time I want to go to my Windows Home directory got annoying really quick, so I created a handy alias on my ~/.zshrc file:

So now I can just type home and get there.

Install what you need to get work done

This is pretty much up to you! Install what you need to work on your projects, you now have the entire Ubuntu repositories and PPA's on your Windows system! Ruby? You got it, NodeJS? Of course.

What I mainly need is tmux and Neovim with my setup:

That's pretty much it, you can now use your Windows 10 system to do dev work, I installed Ruby (and Bundle) to maintain this site, Python 3, pip, NodeJS, npm, yarn, awscli and Angular CLI for my Personal Projects. The best part is that I can do everything I normally do with my PC: gaming, webdev, write on this blog, all without having to jump back and forth between Operating Systems.

I'm going to play around with this setup and I might write in the future on how my experiment went.

About Andrés Arias
I'm a Computer Engineer from Costa Rica working as an Embedded Software Engineer. Here I write about the experiments I'm working on and the things I learn.